How many of you had a Glow Worm?

Well this is even better!


The Fisher Price Ocean Wonders Soothe and Glow Seahorse, in my opinion, is so much better than a Glow Worm.  First of all it plays for 5 minutes before the music and lights fade out, while the Glow Worm only plays for about a minute.  The Glow Seahorse has 8 different lullabies, while the Glow Worm only has 6.  Also, I think the seahorse is much cuter looking than the worm.  :)

Both start up and shut off with a gentle squeeze, both come in girl and boy styles, and both have two volume levels.

I put Ps in the corner of her crib, give it a squeeze and she looks at it until she falls asleep - perfect!  :)

Both sell for about $19.99 at stores like ToysRUs and Walmart.

If you are looking for a fun take on a classic toy, then I would definitely try this toy out! 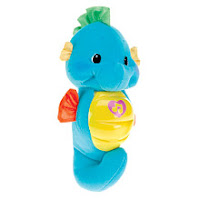 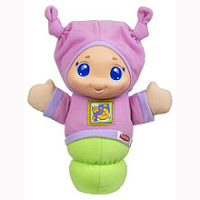 Posted by Mommies Favourites at 6:48 PM