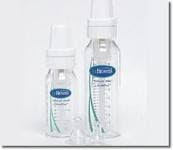 With both of my kids, nursing just didn't work for us, so we went to bottles quite early. With H I did I lot of research on the best glass bottles and decided to use Dr. Brown's glass bottles.

I really liked the Dr. Brown's bottles, they have this venting system that is supposed to reduce the amount of air your baby takes in while drinking. But at around 3 months, H started spitting up quite a bit after eating and we were getting a bit concerned. A friend suggested that we try the Playtex Drop Ins as they were suggested to her as her little guy had reflux and they were supposed to help. I was hesitant to move away from the glass bottles, but was willing to try anything to help him with the spitting up. I was pleasantly surprised by how well they worked - there was a definite change. The bags and drop in inserts are both BPA free and safe for babies - which was another concern for me. I also liked that there was less to sterilize (just the nipples and the rims).

With P, I just went right to the drop ins and so far so good. This time around I don't even sterilize the rims just the nipples.

If you are looking for either a glass or plastic bottle - these are two that I would highly suggest.
Posted by Mommies Favourites at 5:57 AM