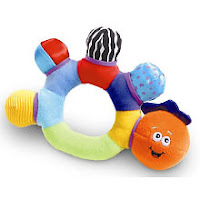 As I was packing up some of H's baby toys this weekend, I came across his first and favourite baby toy. It was a soft rattle that each bumpy part made a different noise (crinkle, squeak, squish, etc.) This was the first toy that he played with as it was soft and easy to hold and pick up. We took this rattle with us everywhere. He played with it so much that he knew, at a very early age, which bump made which noise and he always went right to the middle one which was his favourite. It was amazing to see him pick it up and turn it until he found the one he wanted. Another nice thing about this toy was that you can throw it in the washing machine. His was in there weekly - I would just put it in a pillow case and throw it in the washer and dryer. (A great feature with all that slobber and formula that ended up on it from being in his mouth constantly).

If your little one is just about ready to play with his/her first toy I highly recommend picking this one up. It also makes a great baby shower gift! You can get it from ToysRUs for just $6.99!
Posted by Mommies Favourites at 5:15 PM