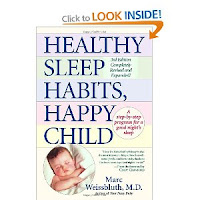 When H was about 3 months old he didn't want to nap. I was going crazy!!!! I didn't know what to do... so I first borrowed "The Baby Whisperer" from the library. After reading just a small section of the book I was crying as according to her I was doing everything wrong. I tried the methods from the book and stressed about this (and cried some more) for a few days, until a friend suggested I look at another book called, "Healthy Sleep Habits, Happy Child."

I went into this book with the realization that I was just going to get some ideas from it, not jump into it full swing. I absolutely loved this book. Now it did say that I was doing a few things wrong (i.e. letting H fall asleep in the swing, rocking him before putting him down, etc.) but it also gave me a few great ideas.

Number 1, work on one nap at a time - get the morning nap routine down pat and then worry about the afternoon nap. I loved that!
Number 2 - it suggested introducing some sort of comfort item like a blanket - BINGO!

I started trying some of these methods when he was about 4 months old. First, I would wrap him in his blankie and rock him (yes I know) until he was almost asleep and then lay him, with his blankie still wrapped around him, in his crib. At five months, I just had to rock him for a few minutes until he was settled and then lay him still awake into his crib with his blankie. At six, months he just didn't want to be rocked anymore - all he needed was to feel his blankie on his face. From this point and still now we just have to lay him down and cover him with his blankie and he goes to sleep without any complaint. Now, he may have a blankie until he is 10 (hahaha) but at least nap and bedtime are actually happening and are not so stressful.

The book also has suggestions for sleep all the way to the teen years. If napping/sleeping are an issue for you, I would highly recommend this book. But remember, you don't need to follow it step by step, just use it for some good ideas!
Posted by Mommies Favourites at 9:30 AM