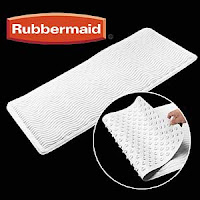 The other day a friend asked for some suggestions on how to make bathtime easier for them since her son had just outgrown his baby bath but is not yet ready to sit all by himself in the tub. I of course recommended the Jolly Jumper Bath Ring which I could not have lived without, but then let her know that they are banned here in Canada. Anyways, this got me to thinking about what I use now for H.

I tried those stick-on non-slip decals for the bottom of the tub, but I found that they didn't stick that well and H was still slipping in the bath between where I put them. I then found the best thing in the world - a suction cup bath mat that basically covers the entire bottom of the tub. Now he can move around, play and stand up without any worries. Another nice thing about this product is that you just pull it up to clean underneath it instead of having those pesky things in the way and collecting dirt on their edges.

This has got to be one of my all time bath faves, that really takes the worry about getting hurt in the tub.

I purchased mine from Zellers for no more than $15 and once it starts to look a bit dingy, it is not that expensive to replace.

The one pictured here is made by Rubbermaid. Mine is a softer rubber, while this one looks a bit tougher, but you get the idea.
Posted by Mommies Favourites at 6:04 PM