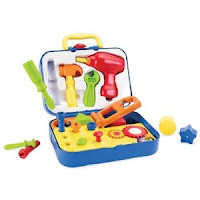 This tool set has been a favourite of H's since he was about 10 months old and he still loves to play with it. At first he would just hammer the nails and turn the gears to hear the music it plays. Now, he tries to use the screwdriver and plays with the shape sorter. This toy is more than just a tool set - it is a learning tool as well! The nails and some of the screws make noise when you move them, the shape sorter says the name of the shape when you place it in the correct spot and the drill sounds somewhat like a real drill. It also folds up neatly and snaps shut which makes it easy to travel with. The only drawback is that it did not come with the white plastic mould that holds the tools, but we just throw them in and close it up - no big deal. If you are looking for a cool tool set for your little one I would highly suggest this one. My parents bought it for him up north, but I have seen it in those tiny toy stores in the mall. I also found it online at www.amazon.com.
Posted by Mommies Favourites at 9:33 AM