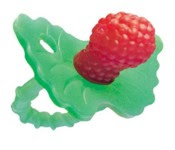 H is getting his second molar - which made me think of the teethers that we tried with him. I can't really say that he preferred one over the other or if he even liked any of them, but he did try chewing on the ones below.

Here are a few that we tried:

We also tried the Nuby Keys that you put in the freezer, but then learned that they had been recalled... I wouldn't trust any liquid filled teether as you never know exactly what is inside of it.

All babies are different. H wasn't one for putting stuff in his mouth, he didn't even really want to take a soother until he was 3 months and then I really had to push it (we were flying home and I thought it would help his ears).

Do you have a favourite teether - why not share it with us?
Posted by Mommies Favourites at 6:16 PM