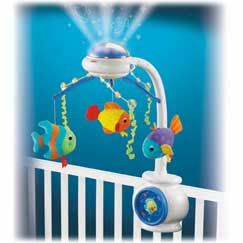 In preparation for Hs arrival we had purchased a whole nursery set to go with our underwater theme. It came with the bedding, valence, wall art and two mobiles. One that just hung there that we put over our change table and one wind up mobile that we used on the crib. I thought that this would be sufficient to keep the little one happy and content in his/her crib.

My girlfriend, Dawn, had told me about this great mobile that she used, but I was convinced that what I had was enough. Little did I know that she was right. The wind up mobile that came with the set was cute, but after winding it up it only lasted a few minutes and then you had to sneak back in and noisily wind it up again. Not the most ideal situation. After a few weeks of doing this, we decided to ask Dawn if we could borrow her mobile to see if it was as good as she said it was. IT WAS BETTER!

This mobile was the "bomb"! It had lights (which projected onto the ceiling), music (4 or 5 selections) and movement, it was battery operated (no more winding), it played for a lot longer and the best part - it came with a remote so that you could restart it from the hallway if you needed to.

H loved this mobile and we were so happy with it that we went out and purchased our own from Toys R Us (for about $50). It is very colourful (and maybe not fitting with all decors) but it does come in a variety of themes: Ocean Wonder, Precious Planet, LuvUZoo - so you should be able to make it fit somehow with your nursery.

We don't have the mobile up yet for little P, but I know that as soon as she is ready she is going to love it too!
Posted by Mommies Favourites at 7:18 PM