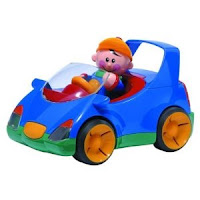 All my friends would agree that I am a toy addict... we have a playroom for H that is FULL of toys. If we were to ever have a new baby there would be no need to get anything new for them :) Right now H's favourite indoor toy is this little car that my parents bought him. It has a man that rides inside and the car lights up, makes noises and moves. He loves to push the buttons over and over and we listen to the same sounds repeatedly. He laughs so hard when it drives away from him and he loves to chase after it. The toy was relatively cheap from Winners and is made by Tolo. It is called Tolo First Friends Toy Car - Primary Colours.
Posted by Mommies Favourites at 5:27 PM